UPDATE: It Isn’t Always About the Number On the Scale

Back in January I posted about the disordered eating habits I developed after an injury.  The short of it is, I became totally obsessed with losing fat and eating only what I perceived to be “healthy” foods based on reading too much. Today I thought I’d give you an update on how that has gone for me.

I’m eating between 1800 and 2200 calories depending on my hunger which is usually dependent on how intense my workout was that day.   I’m training four or five days per week, two heavy lifting days, two 20 minute HIIT workouts and one long HIIT, usually 50-70 minutes, which is nowhere near as awful as it sounds. The last 20 to 30 minutes of the workout is a cool down during which I listen to audio books and this makes me immensely happy.

I feel so much better about life! It’s kind of ridiculous, actually, but in a good way. I’ve noticed several awesome changes. I’m warm! I’m considering buying a thermometer just to check out where I am because I have always held steady in the 97 degree range when measured at the doctor’s office. I would bet money that I’m sitting happily at 98.6. I’m awake! And asleep! I have no problems falling asleep anymore and waking up is no longer a chore. Unless I’m expected up before 7:30am. I’m pretty certain that is never going to change. My periods have returned to normal! Before more food, my cycle was erratic. I was having one little period about a week before my full period. I saw multiple doctors about this and had several tests performed to figure out what was wrong. Not one of the doctors asked me how much I was eating. I had no idea it was connected, but I really think they should have. I have energy! I’m over here getting stuff done and not constantly going for coffee. I’m no longer afraid of food! This is huge. Huge. I used to not have bars of chocolate in the house because I was unable to eat just one serving and save the rest for later. Now I can. I can have any food in the house and not binge on it. No longer do I categorize food as forbidden or bad or toxic, it’s just tasty food that I can have whenever I want. The weight off my shoulders is immense. Chocolate and other foods I used to crave have no control over my thoughts anymore. I had no idea this was possible.

Another important change is my weight. When I first began eating more food, my weight initially dropped a couple of pounds then it went up again. I’ve been at 120 pounds and about 24% body fat for about three weeks now. Here is the cool part of those numbers:  When I started, I was 115 pounds and 25% body fat, so I have gained five pounds (seven if you count the two I lost at first) but I’m at essentially the same body fat. That means I’ve gained a bit of muscle since I started eating more food, which was exactly my goal in the first place! Did you see the photo of my back I posted last month? It never looked like that when I was eating 1400 calories per day and it never would have because I was not eating enough food to fuel muscle growth.

It seems everyone has noticed a difference and I’m embarrassed to admit that more than one of my clients has mentioned that they prefer this new Brandie who eats more. One of them noted this past Saturday morning that I had more energy than she had ever seen in me without coffee. SWEET!

The next step for me is to see if I can get my body fat down a bit. I would like to be between 20-22% body fat. Now that I have leveled off and am not gaining or losing weight, I’m going to wait one more week then move on to the next experiment: Will holding my calories steady at 1950 will work for fat loss for me. According to this calculator, it should be. It will not be a fast fat loss and that is totally okay with me. I’m in this for the long haul. I want this to be something I can maintain for a long time. When the body fat is in my goal range, the plan is to increase my calories slowly again and keep lifting heavy things. Hopefully, I’ll continue to build muscle and keep my body fat in a range that makes me happy. I’ll keep you updated!

3 responses to “UPDATE: It Isn’t Always About the Number On the Scale” 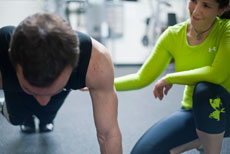